Home BreastfeedingMums
Play Online Bingo with 888ladies - A Fun Way to Enjoy Social Gaming Whether You Have Experience or Not!
Blue Microphones Mikey Digital - A Must Have Plug and Play Microphone for Your iPhone and iPad 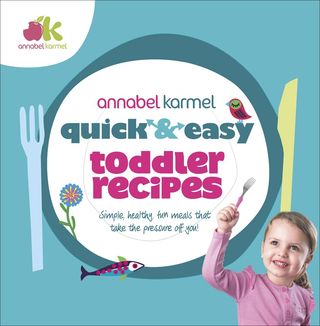 With a great choice of breakfast, snacks, lunch and dinner recipes, many focusing on key food groups such as fish, pasta, poultry, meat, vegetables and fruit, as well as time saving tips and tricks to encourage children to eat well and experiment with different sweet and savoury flavours, this book is definitely one for the kitchen book shelf!

Having bought another of her recipe books in the past when my other children were younger, I was keen to try this new one to see if my latest addition would enjoy the meals I'd be preparing. And I'm pleased to report, so far so good.

With a family of four children and two adults, it can be difficult to keep everyone happy at times. My husband and I like lots of spicy foods like curries and noodle dishes, but as any parent can understand, the children aren't always so keen. I'm almost always presented with the dilemma of who to please at mealtimes and preferring for everyone to eat the same meal, rather than having to prepare two completely different meals, I tend to cook meals which everyone will eat rather than meals that everyone loves!

However, this week, with Annabel's guidance, we've all been happily sampling many new and interesting meals and with those I've prepared I'm thrilled to report so far everyone has been pretty happy.

The book, like others Annabel Karmel has written, has a huge array of meals ranging from snacks to main meals and desserts and is certainly a lovely looking book with lots of very appetising photos of meals within. To be honest, my main problem was actually deciding what to prepare from it as there is just so much choice. However, below are photos and rundowns of how I got on with several meals I cooked. 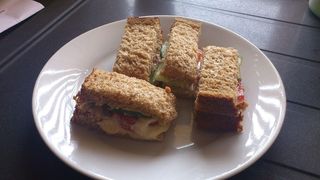 The first snack I chose to prepare was for the children coming in from school and feeling peckish. Normally, I'd make a few ham or cheese sandwichs or toasties, perhaps a shop bought pancake or scone but on this occasion I chose Hummus, Tomato and Cucumber sandwiches. Usually, I'd only serve hummus as a dip at parties so it was a novel and unusual combination which the children weren't too sure about at first glance.

I altered the suggested recipe slightly by choosing wholemeal bread instead of white and I left the crusts on. I know some children won't eat wholemeal but fortunately mine aren't very fussy eaters and I'm pleased to report three of my four children absolutely loved this combination. My eldest wasn't impressed but just becaise she hates cucumber and hummus and I put that down to her being my first and realising I pandered to her a little too much when she was small which resulted in her becoming quite choosy and fussy! However, despite the fact that she wouldn't eat her sandwich, the others all gave this mix the thumbs up so I will definitely make these again as they are a great way of getting some lovely healthy fresh food into the children. 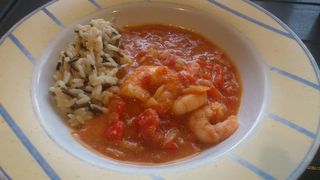 Second on my list to try was Prawn Curry. Now, with this particular dish, I felt I'd be on to a winner as the whole family all love prawns.

Curry however, can be a bit hit and miss as the children don't like anything to spicy and my husband and I don't like it too sweet. This, I am glad to report, satisfied everyone - it was absolutely delicious. Sweet but not too sweet, spicy but not too spicy, it was the Goldilocks of curries!

However, there are a few things in this particular recipe that I'll change for next time around.

Firstly, it was  definitely not quick and easy as it took ages to prepare all the ingredients although maybe this was because it was my first time preparing this meal and hopefully next time it will be much quicker!

Secondly, despite the fact I followed the recipe exactly, the sauce was extremely runny. I felt the method was slightly flawed for suggesting the lid be left on during cooking which resulted in the runny sauce so after ten minutes I removed the lid to try to reduce the sauce but the damage was already done! I almost added some cornflour to thicken it but decided not to in case it all went wrong and happily although runny, it did taste delightful.

Whilst the recipe used uncooked prawns, I substitued these with cooked as they were on special offer in the supermarket and then I simply added them at the very end of cooking and left them sitting in the hot sauce just long enough to heat through without reducing in size. I also served with basmati and wild rice rather than the quick cook rice suggested in the book.

Again, as with the previous meal, this is a recipe I will most definitely cook again as every single person at the table asked for more! 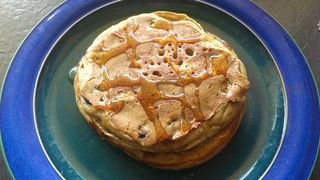 Next, I thought I'd try the Buttermilk Blueberry Pancakes as pancakes usually go down well in our house. My son in particular also loves blueberries so this was a recipe I felt would be a sure fire winner.

Unfortunately, I was very wrong. These pancakes ended up a bit of a disaster and I'm not really sure what went wrong as they looked lovely but just didn't cook easily or taste all that great. Perhaps it was my fault as I had to substitute the light brown sugar with dark muscovado as it was the only sugar I had in the house...

The recipe was also much more complicated than my usual recipe for homecooked pancakes - in fact, the batter ended up extremely gloopy and thick and refused to spread over the base of my small, non-stick frying pan! Each pancake also took about ten minutes to cook so again it was definitely not quick and easy. Sadly, most of the resulting pancakes went in the bin, which is something that almost never happens in our house as I abhor wasting good food so sadly I won't be trying this particular recipe again! 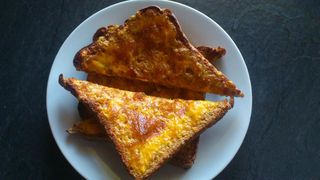 Welch Rarebit was a recipe I was keen to try as I've heard lots about this dish but had never tasted or cooked it before. I had to alter the recipe very slightly as we only had Red Leicester cheese instead of cheddar as we all prefer it and I again served it on wholemeal toast instead of white, primarily because we don't tend to buy much white bread for health reasons.

The results, however, were great. This dish was very tasty although admittedly my husband and I and our son all added extra Worcestershire sauce to ours as we couldn't really taste it within the guideline amount in the recipe. Again, this recipe was a little more time consuming than basic cheese on toast but it was certainly a good way to sneak an egg into a meal without anyone noticing! Another tasty dish that all but one enjoyed, the one being my eldest yet again! 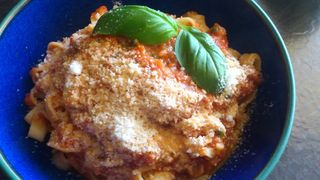 Finally, for the purposes of this review, I cooked the Roasted Red Pepper and Tomato Pasta.

This dish was easy to prepare and what's more was extremely moreish! The only change I made to the recipe was to serve it with fresh tagliettelle instead of spaghetti or mafaldine but the results were very pleasing. This dish was full of flavour and my husband even commented that he felt he could have been eating it in a lovely Italian restaurant we once visited in London! The children were equally complimentary and it is another that I will have no hesitation in cooking again.

Overall, I am delighted with this recipe book, despite my problem pancake experience, and have already bookmarked several more recipes to try out over the next few days. The meals end up looking very similar to what you see in the pictures and from my experience are pleasing for most of the family. The meals are full of flavour and are a great way to get children moving away from standard fish fingers and chicken nuggets - although two of the recipes actually address these two favourites but made from fresh and are on my list to try!

I would heartily advise buying this book if you are currently struggling to get away from mundane but satisfactory dishes and wish to serve something more experimental and colourful. I know that I have certainly discovered the joy in cooking again and am excited to choose, prepare, cook and serve many of the suggestions, particularly as some of the ingredients are things I've never considered using before or just didn't really know what to do with them.